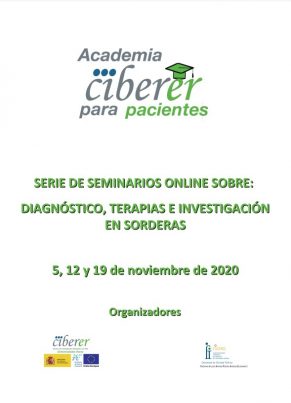 CIBERER ACADEMY FOR PATIENTS. Diagnosis, therapies and research in deafness.

The Centre for Biomedical Research in the Network of Rare Diseases (CIBERER) and its Patient Advisory Council (PCC) holds the “CIBERER Academy for Patients”.

These seminars on Diagnosis, therapies and research in deafness are aimed at people with hearing disabilities and their families, as well as professionals engaged in the field of hearing impairment.

This activity of the academy consists of a series of three online seminars, jointly organised by CIBERER and the Spanish Confederation of Families of People living with Deafness (FIAPAS), which took place on 5, 12 and 18 November 2020. They covered aspects such as the current treatment of deafness, its genetic diagnosis, and research into future therapies.

The full programme can be found here: programme link.

The seminars included in the videos below have been authorised by the speaker for online distribution over FIAPAS channels.

Current treatment of deafness
– From hearing aid to brain stem implant: a world of possibilities
– Can we predict the outcome of a cochlear implant?
– The impact of deafness on cognitive decline

Analytical cookies are used to understand how visitors interact with the website. These cookies help provide information on metrics the number of visitors, bounce rate, traffic source, etc.

Any cookies that may not be particularly necessary for the website to function and is used specifically to collect user personal data via analytics, ads, other embedded contents are termed as non-necessary cookies. It is mandatory to procure user consent prior to running these cookies on your website.